Children's Corner - Vayakhel "Tatty, I have a question," Binyamin said to his father at the Shabbos table. "At the beginning of this week's parshah, Moshe teaches the Jewish people about the mitzvah of Shabbos. Why was that necessary? The Jewish people knew about Shabbos already. It's one of the Ten Commandments that they heard at Mount Sinai. And we learned that HaShem gave them the mitzvah of Shabbos even before Matan Torah!" 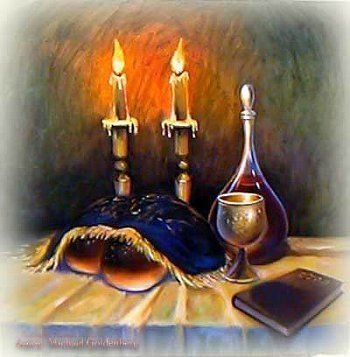 "The mitzvah of Shabbos is repeated in the Torah many times," replied Binyamin's father. "As a matter of fact, this mitzvah is mentioned more often than any other. Every time we read about Shabbos in the Torah, we can learn something else. Let's see what we can discover in the pessukim of this parshah."

Binyamin brought a Chumash Shmos to the table and opened to Parshas Vayakhel.

"Stop right there," requested his father. "That means, 'In six days the work shall get done'."

" 'The work shall get done'?" repeated Binyamin in surprise. "That sounds so strange. Why doesn't the Torah simply say, 'In six days you shall do work', like we say in kiddush on Shabbos day: 'Sheshes yomim ta'avod'?"

"Good point, Binyamin. That's just what I meant when I said that we should try to learn something new each time we read about Shabbos. We already know about working all week and resting on Shabbos. This passuk is not teaching us that we must stop working on Shabbos. Here the Torah is teaching us something about the work we do all week."

"What do you mean?" asked Binyamin.

"HaShem wants us to work for a living. We work at our jobs so that we can buy the things we need in order to live and serve Him. As we work we get paid; that's how we support ourselves. But HaShem wants us to remember that it is really He Who blesses us with all our needs. He sends us His blessing through our jobs.

"Some people don't know this. They think that it's their job and their work that makes all the difference. So they put everything they have into their work - their head, their heart and all their energy - everything to make more money.

"The Torah teaches: 'Six days the work shall get done'. Getting it done means doing what you have to do so that the job gets done, knowing all the while that in this way HaShem's blessing will come. Getting it done is different from putting yourself totally into the work. When a Jew comes to Shabbos knowing that it is HaShem who provided for him during the week, he keeps Shabbos in an entirely different manner. He feels that all of his weekday work has been completed and he doesn't think about it at all."

"I get it," answered Binyamin. "But still, if the job is just something HaShem uses to give His blessings, who needs it? Why doesn't He just give us what we need directly?"

"Binyamin, what have we been reading about these last couple of parshiyos?"

"The Mishkan, of course."

"HaShem commanded us to build the Mishkan so that His holiness would be revealed here in our world. We reveal HaShem's holiness when we do mitzvos like putting on tefillin or lighting Shabbos candles. But even when a Jew is not directly involved in a mitzvah, he can reveal this holiness in many ways through the work that he does.

"For example, if I weren't a computer salesman, I would never have met Mr. Brown. He would not have been impressed with how honest I was when I sold him a used system for his office. We would not have become friends. He would not have invited me to his house. And I would not have had the chance to bring him a mezuzah as a gift and put it up on his door. This story - and so many others like it - shows us how we can bring HaShem's holiness into this world through our jobs."