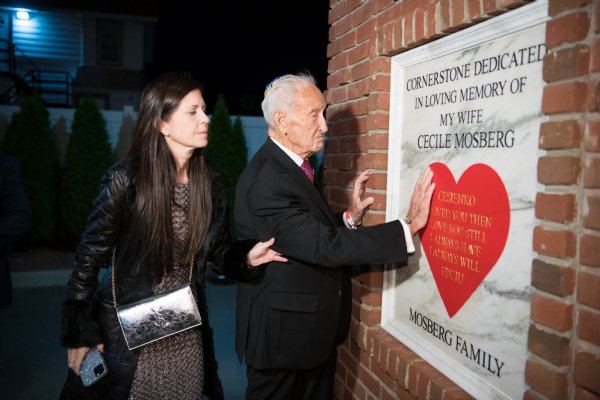 Edward Mosberg ran his hand over the red heart on the cloth draped over the cornerstone, which he had dedicated at Rutgers Chabad House in memory of his wife of 72 years, Cecile, who died in February 2020.

The 95-year-old Polish Holocaust survivor later told the almost 400 guests gathered Oct. 19 at Chabad in New Brunswick for the 43rd National Founders Day Dinner that “tonight I share my love story with Cesia,” her Polish nickname.

“We had 72 wonderful years,” he said as he accepted the Ner Tamid Award for his global philanthropic work and rescuing, refurbishing and donating more than 20 Holocaust Torahs.

He lifted up a locket worn around his neck containing a photo of Cecile given to him by her in 1942, telling the gathering, ”she was the best wife anybody could have. Cesia, I loved you then. I love you still and will always love you.”

Mosberg, of Morris Plains, who lost his entire family in the Shoah and survived the Plaszow and Mauthausen concentration camps, met his wife in the camps.

The dinner, which reached its goal of raising $1 million, also honored Rutgers President Dr. Jonathan Holloway and “cryptopioneer” and philanthropist Brock Pierce for his support of Chabad. Chabad executive director Rabbi Yosef Carlebach said hitting that goal was especially important since the pandemic forced the cancellation of last year’s dinner. While most classes were virtual with few students on campus, Chabad kept its men’s and women’s dorms open at only 12% of capacity, as well as its facilities and kosher dining room. This year the dorms are completely filled.

In a nod to the pandemic, as guests arrived on College Avenue they were directed to the back of a long line on the side of the building where medical professionals were administering rapid COVID tests. After being handed a paper wristband indicating a negative result they were directed to the rear parking lot where lights had been strung and tables set up for the cocktail hour on a fortunately warm and dry evening.

There with his arm around Mosberg, Shai Abramson, retired chief chazan of the Israeli Defense Force, who had flown in earlier that day, sang “El Maleh Rachamim” in memory of Cecile. The cantor later entertained during the dinner, kicking off his performance with a stirring rendition of Leonard Cohen’s “Hallelujah” sung in Hebrew. He finished with “My Way,” sung in English.

Adrian Kubicki, the consul general of Poland, read a letter from the president of Poland during the outdoor activities. Kubicki, who later presented Mosberg with his award, told the crowd that the Polish and Jewish communities “have shared some beautiful moments and we also share some of the most painful memories.”

Mosberg, who had visited Poland many times and participated in Marches of the Living to Auschwitz, had become “a great ambassador of Poland,” said Kubicki. “He is an ambassador of truth,” said Kubicki, adding that Mosberg has “done so much good around the world” in ensuring another tragedy like the Holocaust “never again happens to the Jewish nataion, the Polish nation or any other nation.”

Holloway, who began his tenure the previous year, was described by Rabbi Carlebach as a “mensch” for his interest in supporting the work of Chabad and other campus institutions benefiting students.

Israel Deputy Consul General Israel Nitzan, in presenting Holloway with his award, cited “the very good relationship” with Holloway as well as the president’s leadership skills in steering the university through the pandemic.

Holloway is an accomplished author and historian who also serves as university professor and distinguished professor. He specializes in post-emancipation American history with a focus on social and intellectual history. Holloway praised Chabad as playing an important role in the campus community as “a place of possibility” where students find a warm and accepting atmosphere to be inquisitive and be challenged.

Holloway said the university does not support hate, which he said he had made clear several months ago in a statement following a rash of antisemitic incidents on campus in which he deplored “hatred and bigotry in all forms,” including antisemitism.

Holloway pledged to work consistently to eradicate antisemitism while supporting all students.

He recalled the “deep and soulful conversion” he had with Carlebach after the incidents and thanked him for keeping Chabad House open for one of Rutgers’ “beloved communities.”

Pierce is chair of the Bitcoin Foundation and advises countries on the benefits of blockchain and crypto currencies, subscribing to the belief that a billionaire has the ability to impact a billion lives. Through his Brock Pierce Foundation, he supports philanthropic causes worldwide. Although not Jewish, he has become a significant supporter of Chabad and the Jewish community.

He was presented with his award by Yidel Perlstein, the Orthodox chair of Community Board 12 in Brooklyn and Pierce’s chief of staff, who spoke about Brock’s respect for Judaic traditions, including Shabbat observance. Pierce, who came in from his home in Puerto Rico, said, “I measure my success in life in not what I have, but what I do with what I have. I view money as a form of energy and energy has to move and flow.”

Dressed in traditional Chabad attire out of respect, Pierce said he wears a bracelet every day given to him by Mosberg with the survivors’ Holocaust tattoo number on it, adding, “Everything I do is to help people.”

Toward the end of the program Pierce learned Chabad was $150,000 short of the $1 million goal and announced he would make up the difference.