In Montreal, Minyans on Balconies Serve as Bridges Across Cultures

(as seen in Tablet Mag)

On a recent April day, Jennifer Dorner, a resident of the Outremont neighborhood of Montreal, heard spirited singing outside her home. She walked to her window, looked out, and saw her Hasidic neighbors praying on their front porches. In the warm sun, two teenage boys sang praise to God in the fashion adopted by ultra-Orthodox men in the time of COVID-19: davening on the porches and balconies of their homes in an attempt to fulfill their obligation to create a minyan while observing rules of social distancing.

Dorner, who is not Jewish, was moved by the lovely tune, and posted a short video of the scene to Facebook and Twitter. “Shabbos morning enjoying the neighbourhood voices. Ça va bien aller. #Outremont” 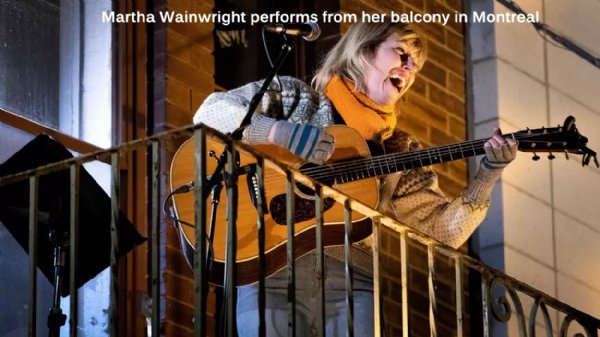 The next day, Montrealer Rani Cruz replied to Dorner’s tweet: “The harmony is so perfect. When this is over, this is going to be one of the things I will miss about Covid times. I hope the Hasidic community knows how much their sharing of their prayers has helped us all. Thank you. Merci.” The tweet has now been viewed 16,800 times. Says Daniel Seligman, a local music producer, “it’s nice to see a kind of cultural exchange that shows a beautiful side of Hasidic Judaism that usually remains veiled to the greater public.”

Not everyone was so happy about the public religious display, however. English-speaking and French-speaking Quebec have had their own famous internecine struggles. And even before the balcony prayers, harmony had not always prevailed between the ultra-Orthodox residents and their neighbors. “For the Franco-bourgeois population, the relationship with the Hasids is often fraught with a kind of general negativity,” Seligman told Tablet, like “complaints about the Hasids taking up parking spots—and other little nitpicky things.”

The first person in Montreal to become ill with COVID-19 was Hasidic, which caused concern and panic. “The Hasidic community was unfairly criticized for not following distancing protocols,” Seligman said. “Like in every other community, about 95% of people respected the limits and followed the rules,” but also, as has been evident around the world, scapegoating the Jews has been common, perhaps most famously by the mayor of New York City himself.

But something unexpected happened in Outremont that changed the conversation entirely. On April 27, Dorner opened her front door and found a container of rugelach from Boulangerie Cheskie—the most popular pastry shop in town, which happens to be owned by a member of the Hasidic community—with a note rolled up into a scroll and tied with a red ribbon. “We would like to thank you and show our appreciation for your patience and understanding in this hard time that we experience together,” it read. “During the last few weeks, you have seen us coming out on our porches 3 times a day to pray. It might have caused inconvenience to some of you and we value your support. Please accept our small token of appreciation. Bon Appetit!” On the top of the letter was printed “Ça va bien aller” and the ubiquitous rainbows that have popped up all over the city along with the community mantra.

Dorner felt it was she who should offer thanks: “In this time of fear and crisis, my family, my husband, and I have found the praying very beautiful—comforting and soothing,” she told me in an interview. “For us the singing has been a gift. It is supposed to be a time of fear and restriction, but it’s actually been a time to get closer to our neighbors.”

The offerings of sweets were delivered to every resident of Lajoie Street. And the gift-giving caught on. On another block, a Hasidic woman made a cake that she packaged and distributed, and on another block a father distributed chocolates with his boys. The sweets then made their way to the nearby neighborhood of Mile End, and to the doorstep of a columnist for La Presse, Montreal’s largest and most influential French newspaper.

“It was an ultra-Orthodox—and ultra-fast!—girl who ensured the delivery,” wrote Rima Elkouri in a column in La Presse on May 7. “By the time I opened the door after hearing the doorbell ring, she had already run shyly away. And before I could even taste it, my confined, always hungry teens had eaten everything.”

“The songs of my Hasidic neighbors have become the soundtrack of my confinement,” Elkouri wrote. “Morning and evening, their prayers on the balcony punctuate the strangeness of everyday life. Soothing background music for a disturbing era.” Unbeknownst to their givers, the sweets had found their way to a uniquely receptive audience. “I know what hate feels like,” Elkouri told Tablet this week.

Born and educated in Montreal, the prominent journalist considered herself a French Canadian through and through—until she was named a columnist on Sept. 10, 2001. “On the 11th,” she wrote in her first column, “despite myself, I became an Arab columnist. I never wanted this label. ‘Don’t want to be Arab’ … was the title of my first column.”

She was surprised and terrified by the messages she got from the community. “I have observed xenophobia very closely as others observe bedbugs,” she wrote. “Regularly, since September 2001, readers have summoned me to return to 'my country.’”

But what country was that? Her father was born in Senegal, and his father was from Lebanon. A Catholic, he arrived in Canada in 1967. Elkouri’s mother was born in Aleppo, Syria, a member of the Armenian Catholic Church, the daughter of a man who had survived the Armenian genocide, escaping the fate of his brother and father, both of whom were murdered in 1915. Elkouri was raised as a Christian, though she says she is not now religious.

She was assaulted with messages from the ignorant, but worse, from the educated—“this hatred which has no excuse for ignorance and which even drapes itself in virtue. Racism without spelling mistakes seems to me the worst form there is.”

In our conversation, she probes xenophobia one step further, to a place her Hasidic neighbors know only too well.

“Hate doesn’t start with genocide, but with small things,” she told me. “Targeting people because they are different. I feel the responsibility as the granddaughter of a genocide survivor to stand up and never stay silent when I see these kinds of things. This applies to everybody—whether you are Jewish, Muslim, or Christian. I have a voice and freedom to express my opinions—so I have a very privileged position. But what does this kind of behavior mean for people who don’t have my privileges? This for years and years is a subject I have explored in my writing.”

Max Lieberman, a Satmar who moved to Montreal 20 years ago from Brooklyn and serves as a community leader and a volunteer for Hatzollah, says this kind of prejudice is not unknown to his community. But he looks on the bright side. “Every crisis, some good things come out. Fifty percent of the problems go away if you just talk. You show your neighbors you don’t want to impose on them anything, you want to live with nice neighbors, on a nice street—we all want the same thing. Then they realize you have different ways of doing things, but you’re a human!”

The neighborhood itself—Jennifer Dorner, Daniel Seligman, Max Lieberman, and the boys singing harmony that Shabbat morning in April, together, wrote the final chapter of this story, with, you might argue, a little help from above. And appropriately enough, the surprising news was announced in Rima Elkouri’s latest column in La Presse.

Dorner, an arts administrator, was just last week appointed executive producer of POP Montreal, a nonprofit arts organization that produces a music festival in the fall. During the confinement, she, along with many other Montrealers, has been regularly listening to “Chanter sur les balcons de Montreal”—“Singing on the balconies of Montreal”—a socially distanced concert series in the city supported by POP Montreal and hosted by Martha Wainwright, daughter of American folksinger Loudon Wainwright III and the late Kate McGarrigle. Last week on her show, Wainwright said she has been moved by the singing of the Hasidim and mused about inviting a cantor to perform on her program. Dorner, not missing a beat, mentioned the invitation to her borough councilor, Mindy Pollak, the first Hasidic woman to be elected to political office in Canada, who called Max Lieberman. Dorner then texted POP Montreal creative director Daniel Seligman—and so it was done.

“Everyone thought it was a great idea.” Instead of a cantor, the two teenagers from Rue LaJoie singing harmony that sunny Saturday will offer their own songs.

“There is a crack in everything. That’s how the light gets in,” wrote Leonard Cohen, Montreal’s favorite son, and the only artist who has bridged the Anglophone and Francophone communities. The concert will take place on Tuesday, May 12, at 7:30 p.m. and can be accessed via Facebook. Concludes Elkouri in her column: “Sometimes there are these balconies that serve as bridges.”